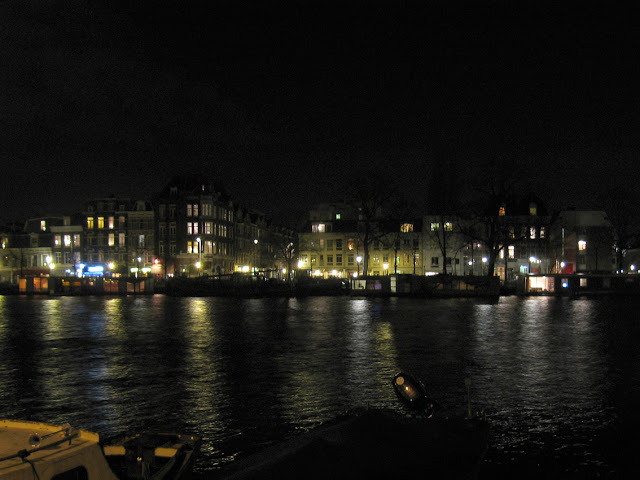 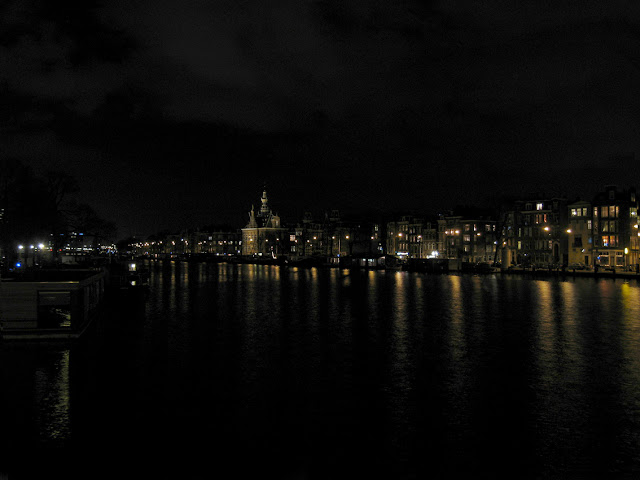 The Museumplein on a very cold night 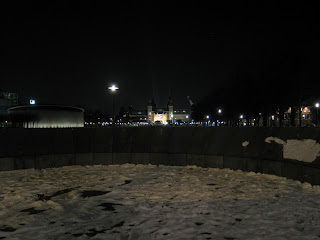 This photo was taken on a very cold night in Februari (look at the blue smoke coming out of the Rijksmuseum). I hope to post more pictures of the Museumplein in a later stage, because the plane-trees are very beautiful in the summer and beginning of fall. 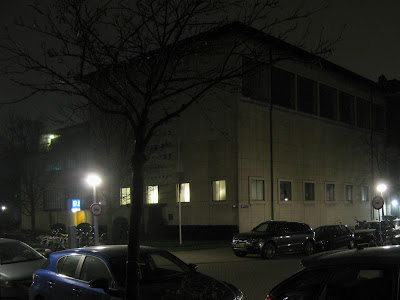 When I came to Amsterdam in 1990 I lived around the corner of the Lekstraatsynagoge in De Rivierenbuurt.

A few years ago I heard a story from a Jewish man called Stan Rubens. In September 1942, when Stan was 11 years old, he and his family were caught during hiding and subsequently imprisoned in the Hollandsche Schouwburg. Stan found a way to escape from the childcare building that was located across the street. He managed to stay alive during the rest of the war by fleeing and hiding in different places around Amsterdam and Utrecht.

After the war, when he was 14 years old, Stan and his family reunited. The years after the war were very difficult for the Rubens family. In that period Stan got gitarlessons and he soon started his own music group. It was a "Hawaiian Ensemble". Around 1947 he got the opportunity to organise some lively music-evenings in the Lekstraatsynagoge. The thought of this fourteen year old boy making exotic-music in this bleak synagoge in the Rivierenbuurt moved me deeply.

At the age of 19 Stan emigrated to Australia and in his later life he became a professional musician in Hawaii. 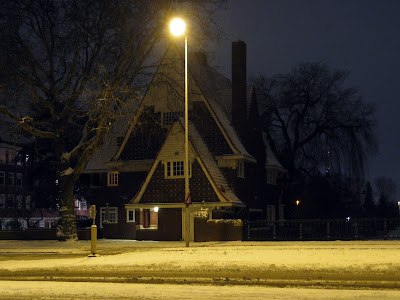 When I went to the Rietveld Academy I passed by this house everyday but I never took much notice of it (the modern houses on the Bernard Zweerskade were more interesting in that time). However I found out that I always experience a subtle sense of nostalgia when passing this building. Melancholia would be a better term I think to decribe this specific atmosphere. It is strongly connected to my feelings of Amsterdam as my hometown. The desire to have a home at least, unfulfilled, almost like an ancherpoint. 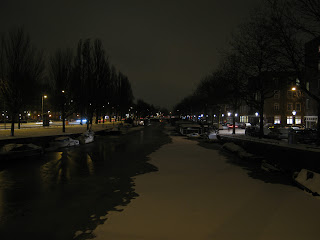 When I took this picture I was standing on the bridge of the Van Hilligaertstraat with my nose towards the Ruysdaelkade. This canal is the border between my area of De Pijp and the western part of Amsterdam-Zuid. I have some pictures of that area (Museumplein, Concertgebouw) but not so many. I hope to post some pictures of de Lairessestraat-neighbourhood in a later stage.

When I made this picture I was focussing on the lights, the colors and the feeling of space. There is also a specific historic story connected to the rowingclub (on the left). All in all there were a lot of focuspoints when I was standing out there in the snow.

Later when I looked back on the computer I noticed by accident the little yellow car parked on the Jozef Israëlskade (a bit off-centre, straight under the streetlight). This mini-mobile is owned by a couple that I got to know this last summer. (just like me they have a habbit of making eveningtrips around the south-part of the city). Whenever I see them driving by I think: "It's a big miracle that they both fit in this tiny, yellow machine but they really do". 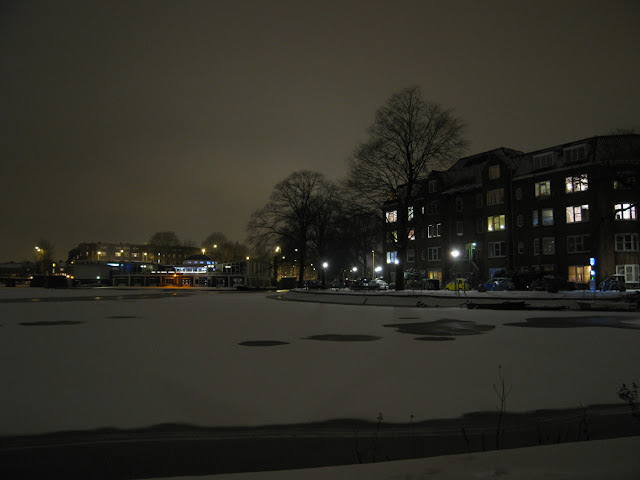 Although I love Amsterdam a lot and enjoy the lively beauty of it, I experience a sentiment of emptiness or desolation in this town as well. For years I took these impressions for granted but only since a couple of years I became more alert to them.

From 2009 untill 2010 I did freelance work for The Shoah Foundation. This organisation, that was originally initiated by Steven Spielberg, collected world wide more than 50.000 video testimonies of Holocaust-survivors. Around 2000 interviews were about Holland (1000 of them were Dutch spoken and another 1000 in other languages). The coördination of these interviews was (and is) done by Denise Citroen.

I was watching the interviews, summarizing the stories and classifying it so people can easily search through them. It was very inspiring to hear and learn so much about this period. In total I indexed 128 interviews, from mainly Jewish survivors, but also quite a few Jehovah's Witness survivors, political prisoners, people that were active in the resistance and a Roma survivor.

In many testimonies there were recollections about the Meisjes-HBS in the Gerrit van der Veenstraat (wich was called Euterpestraat than). After the German invasion the headquarters of the Sicherheitsdienst (SD) were stationed there. People were interrogated in this building, imprisoned and more than often tortured. In 1944 the school was partly bombed and the headquarters moved to the Apollolaan. 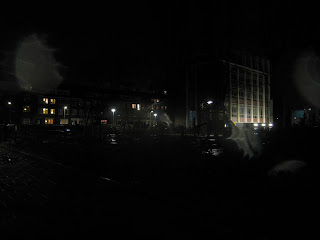 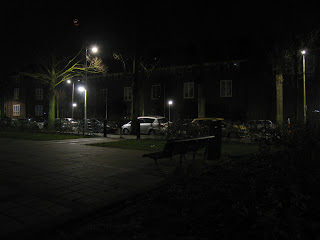 Go to: A picture of the school during world war II

This beautiful area is located right behind the Apollolaan. When I was walking there I had a strange but nice experience of security. Maybe it was the warm beauty of these houses and the lights that came from these windows? Maybe it was the moon and all the reflections in the water? I don't know. It was not very warm that evening. It was actually quite cold. Cold but pleasantly silent. 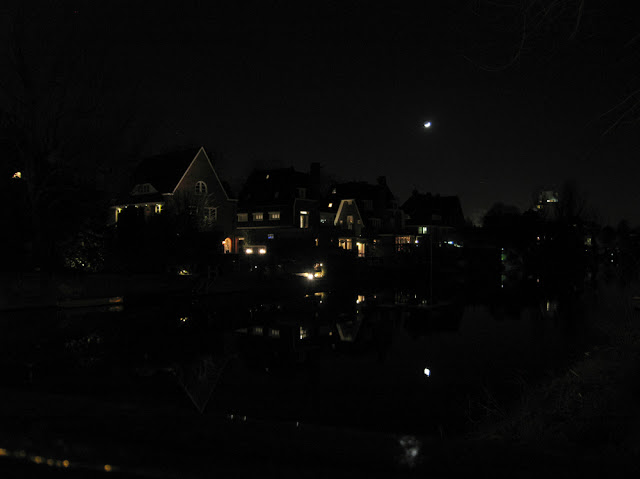 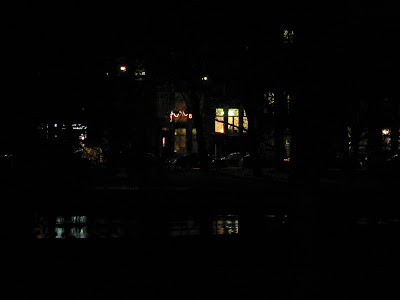 This picture was taken while I was standing in the Jan Steenstraat with my camera focussing on the Ceintuurbaan. This means that I was photographing straight through the Sarphatipark. It was very late and very dark. While standing there two little lights appeared, quite suddenly, in the darkness of the park. I wanted to get these lights on the picture as well, so I tried to catch them with my camera. While doing that I saw that the lights changed direction and moved towards me. At once two policewomen on a bike were standing right in front of me asking what I was doing there (they had seen the little red light of my camera and were wondering what it was). The three of us were all attracted by suspicous little lights at that specific moment in the Sarphatipark. 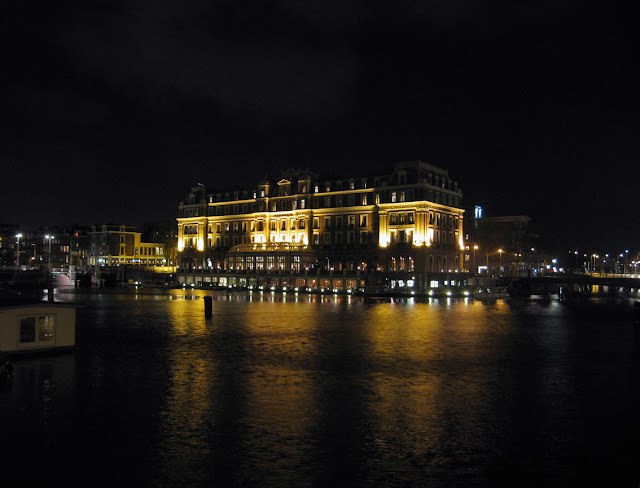 The Asscher Diamond Factory on the Tolstraat 127

For me this blog is like a wandering journey through this town. While rambling I am more led by the atmosperes of certain locations than by the historical facts. Like in my own home or livingroom each object has an anecdote connected to it. The pictures below show the Asscher Diamond Factory. I heard a lot of stories about this factory while working for the Shoah Foundation. But it was not untill recently that I discovered that it's actually located not so far from my own house in the Van Ostadestraat.


The factory became well known in the beginning of the 20th century for a special octagonal diamond cut (Asscher cut) that was developped by Joseph Asscher. The company was first based in the centre but later this new factory was build in De Pijp wich was the border of the city at that time. The new streets that arised around the factory in the thirties were called after various gemstones (Diamantbuurt). In that period the factory came under the direction of Abraham Asscher (Joseph's brother)

In the thirties Asscher was a big employer for many Jewish diamond cutters. During world war II Abraham was (together with David Cohen) designated by the germans to be the chairman of the Joodsche Raad. They became a tool of the nazi's in the deportation of tens of thousands Amsterdam Jews. Eventually Abraham Asscher and his family were deported to Bergen-Belsen in 1943 where they survived the war.

I imagine now all the tensions that the diamond workers experienced while working here in the thirties. The rumors, the threats and than the horrible stories of the refugees from Germany, escalating in the invasion of the nazi's and the oppression. It all feels very nearby while looking at this plain and modest entry of the factory somehow. 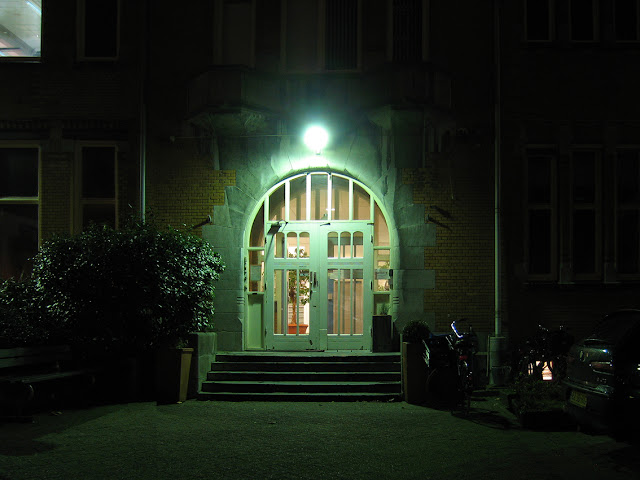 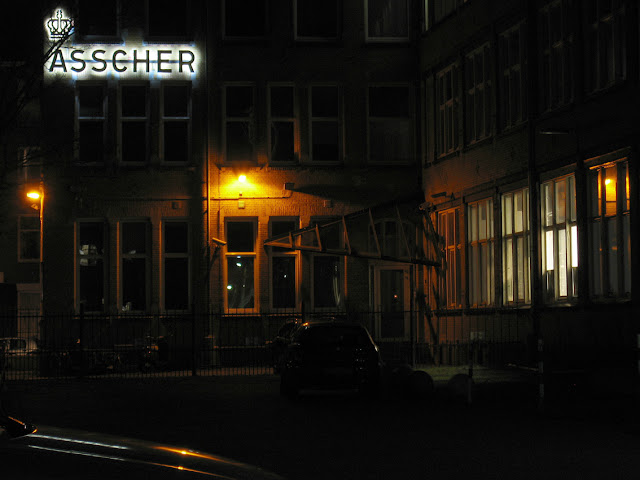 There are more posts to be found on the next page. Just click "older" posts (button on the right-down side).

When I was going out to make this photograph it was very bad weather. Rain, wind, hail etc. It was hard to get a good position for the camera and I almost got hit by bus 15. At last I found a chance to take some pictures but my I expectations were not very high. Later when I came home and saw the images on my computer I was kind of touched. The once so sturdy skyscraper of Staal appeared to me as a vulnerable and sensitive Grande Dame.

The skyscraper is positioned precisely on the spot where the Rooseveltlaan and the Churchillaan come together. On the backside of the building there is a triangle-shaped square called Merwedeplein. A picture of the Merwedeplein is also on this weblog. Anne Frank and her family lived on that square from 1933 till 1942 (when they went in hiding). This means that, when the Frank's lived there, it was a very new and modern neighborhood (as we see also in this film-clip about the Berlagebrug). So many things happened in this Rivierenbuurt district. It's almost as if the Grande Dame of the Victorieplein carries all the stories with her. 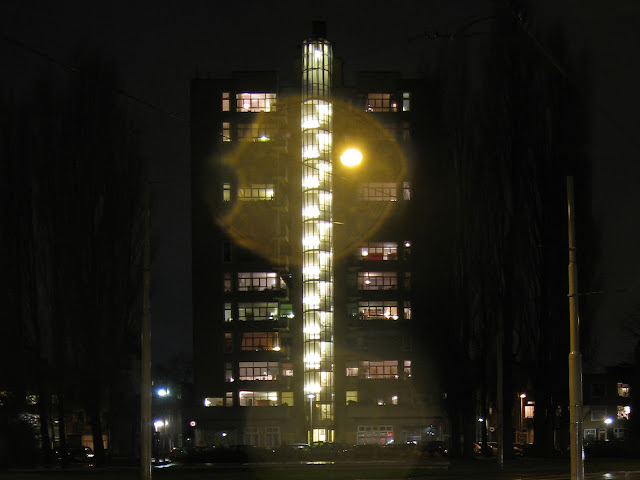 The Amstel River around Christmas time 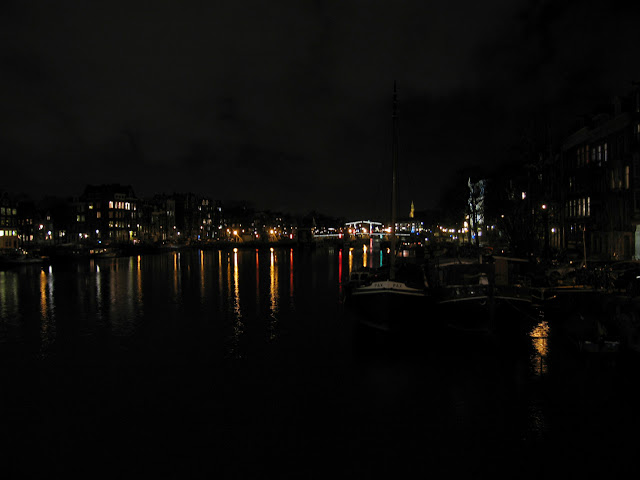 Merwedeplein and the monument for Anne Frank 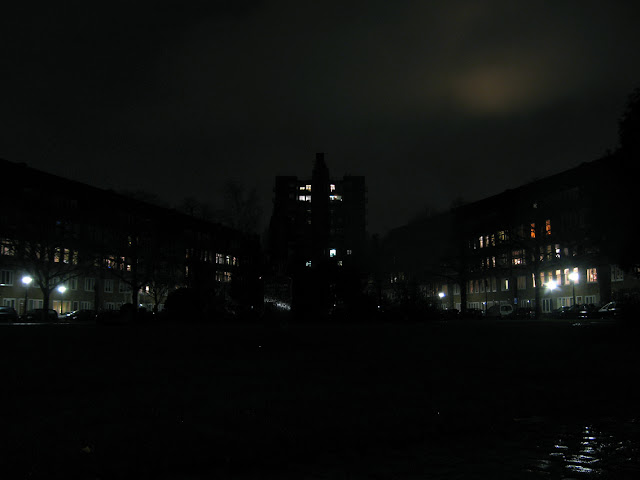 Go to: Youtube. Anne Frank, seen from the window 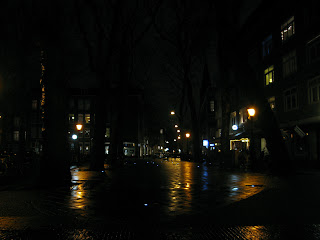 The Van der Helstplein is just around the corner from where I live. I like this picture because the atmosphere is so archaïc and rough. While writing  in this blog and making the pictures it becomes much clearer to me that De Pijp arised from a completely different mentality than Plan-Zuid. I read that there were very promising plans before they started building it (around 1850) but there was no money for it. It came to a plan with no social coherence, just a lot of cheap houses (jerry-building).

Concertgebouw after the rain (december 2011) 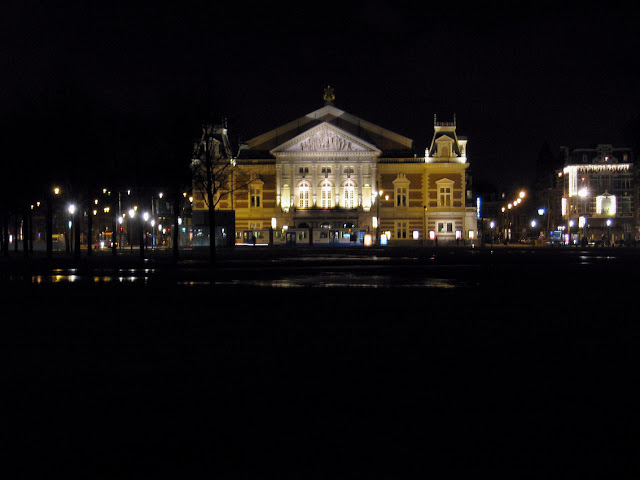 Another view on the Amstel river. The houses on the other side are part of the Diamantbuurt district that I already mentioned in the post about the Asscher factory. The water seems to be streaming pretty fast on this picture. I also like the rythm of the lights in combination with the vertical reflections in the water. This was a very jazzy moment in the diamond-district. 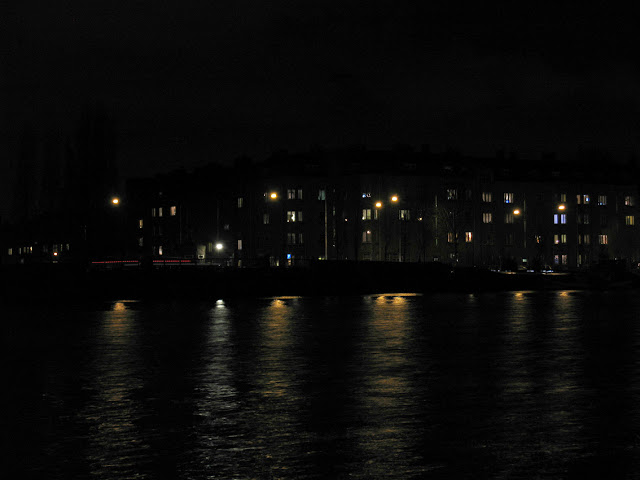 De Amstel in the winter 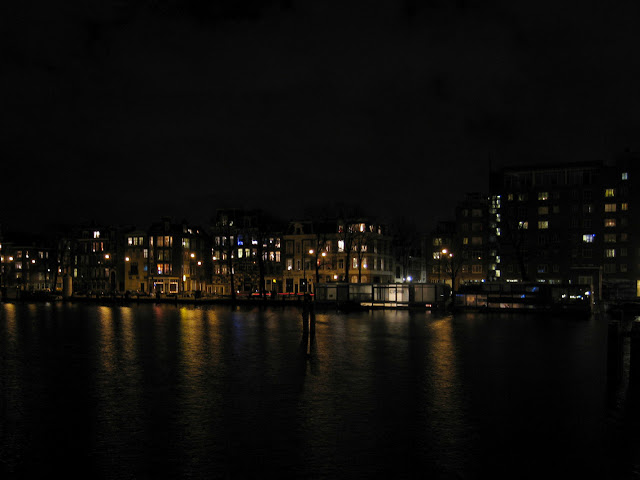 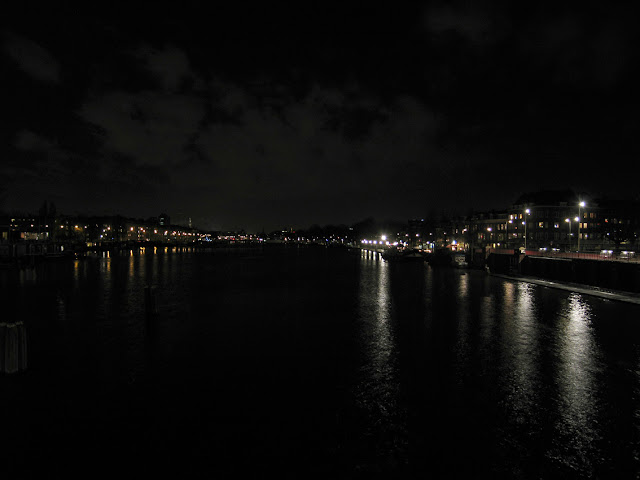 About this blog and The Berlagebrug

A few months ago I started to make these long walks along the Amstel. While strolling along the Weesperzijde I had a nice view over the river and all the houses on the Amsteldijk. The pitch black water, the grey capricious skies, the lights, the reflections. Sometimes I was imagining the Amstel to be a continuous stream of black ink just streaming into the city and there was nothing we could do about it.

On the Berlagebrug there are these little extensions (erkers) from where you have a nice position to watch the river float gently into the city. While standing there one evening I realized that I live now for more then half of my life in Amsterdam. 22 years is quite a long time and at that moment it felt like the right moment to do something with it. I decided to take my camera with me while browsing the Amstel river and this strange city; that I never called my hometown but I think I will from now on.

Here is a short film-clip about the opening of the Berlagebrug in 1932. It's impressing to see this part of the city in the construction phase. The film presents a brand new world full of life and opportunities. Nevertheless the crisis of the thirties was already present at that time.